There is a ton of stuff in here today, but lets start with a little laughter, at least I think it is funny 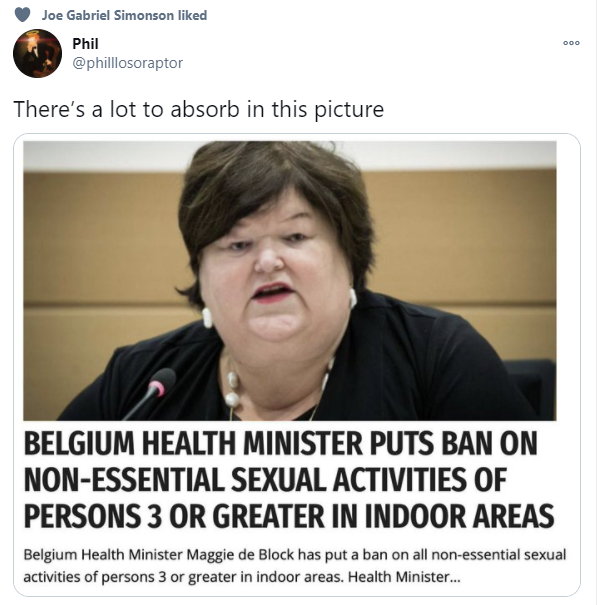 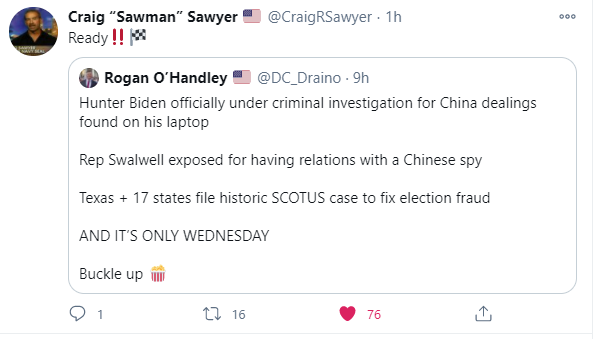 Let’s start with most likely the Final Legal Showdown

Time to put your big boy pants on SCOTUS, there will be a large number of people unhappy with your decision no matter which way you go. Will you allow the greatest Fraud in American history to be accepted by the Greatest legal body in the World or show how important democracy is to America? 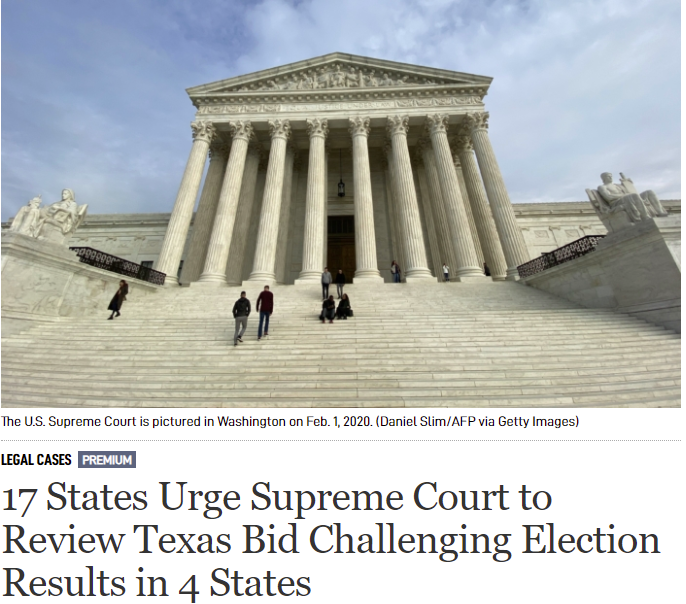 And out of the SWAMP steps Jeb with the ever Anti-Trumper Stephen Hayes liking it, Hayes is a constant guest on Bret Bair’s panels, at least when I used to watch Foxnews

The full context of the brief in his post is less than two pages and well worth reading. I was going to post here, but this is already getting very long 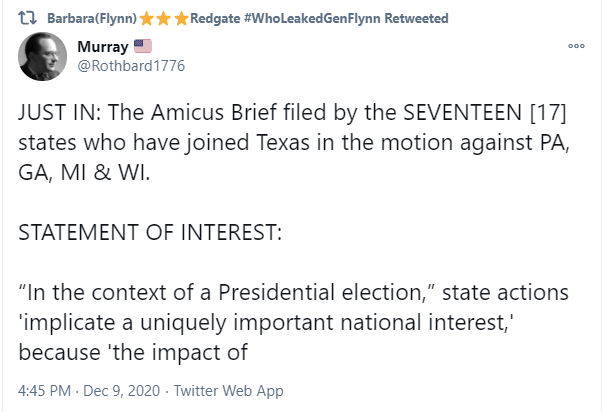 And they keep censuring the President

Didn’t you wonder why Breitbart and others came down so heavy on Lin Wood, how dare he try to hold Loeffler, Purdue and Kemp accountable. Well add this little tidbit of swampiness. Do you think Loeffler will publicly hold Kemp or the GA AG accountable when the AF’s wife is her Chief of Staff? Do we need a recount of Loefler v Doug Collins?

Do we really want to see this for the next 4 years? 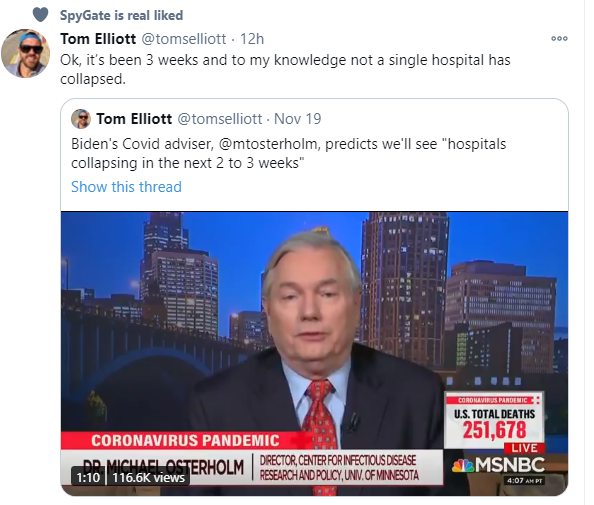 You HAVE to see this video 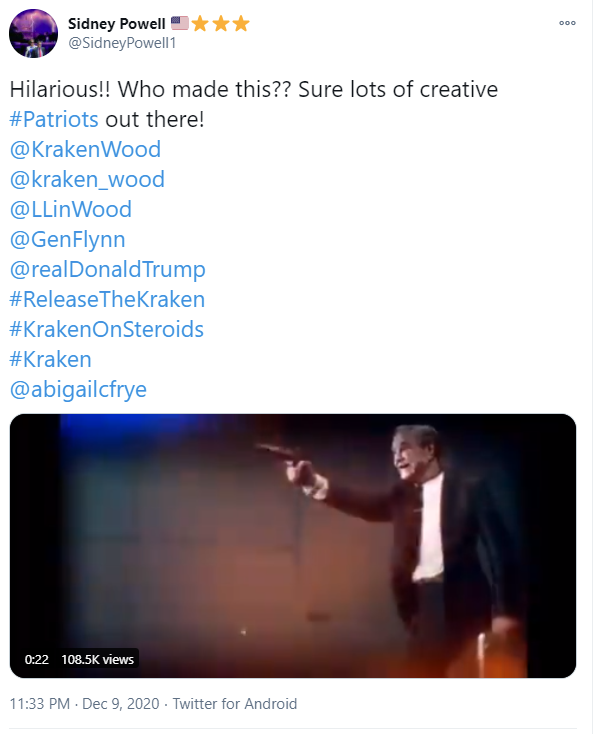 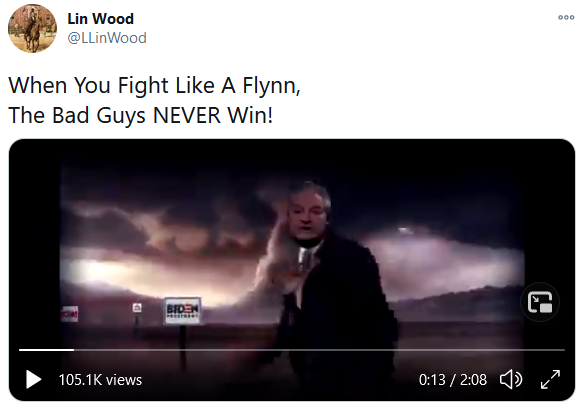 The full Federalist article on Swallwell 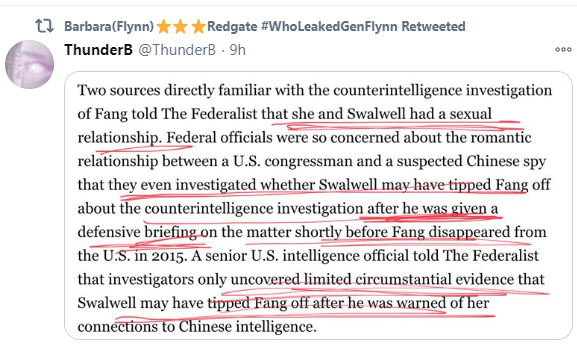 It will be more embarrassing when Joe’s finances are uncovered.
The MSM hid this obvious scandal all along. 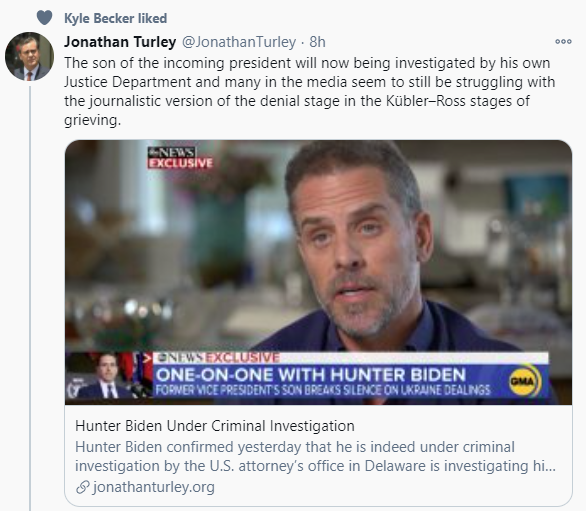 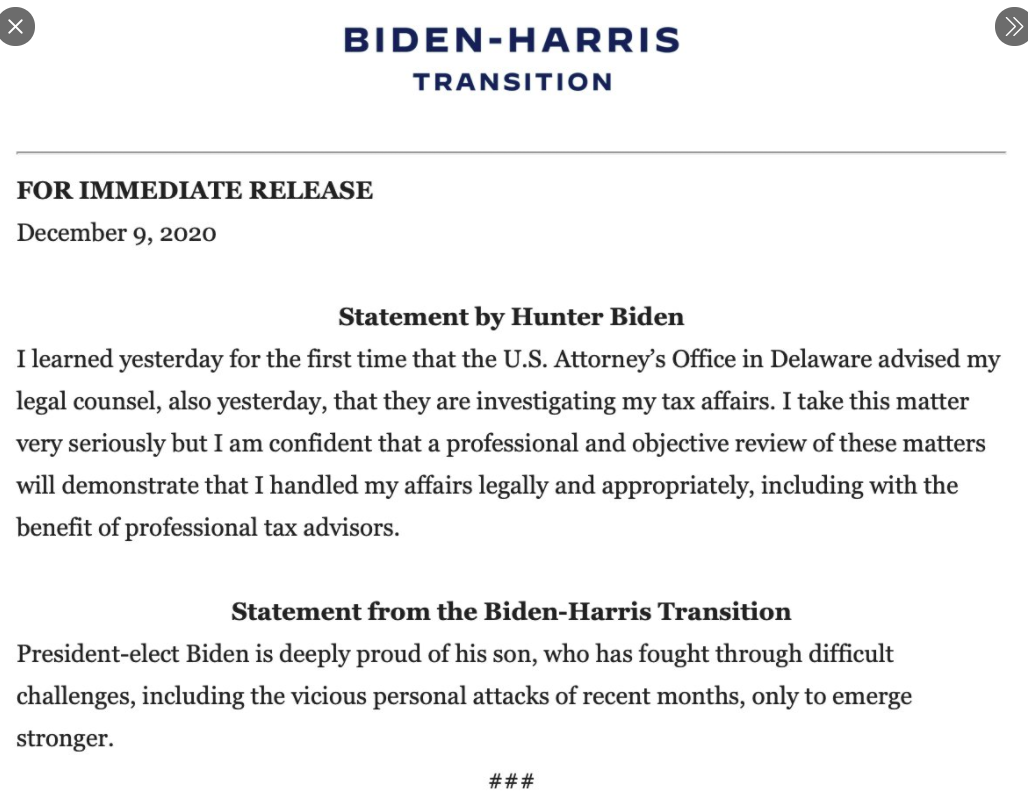 More on the Biden Crime Family here (brother James, son Hunter and 10% for the Big Man) 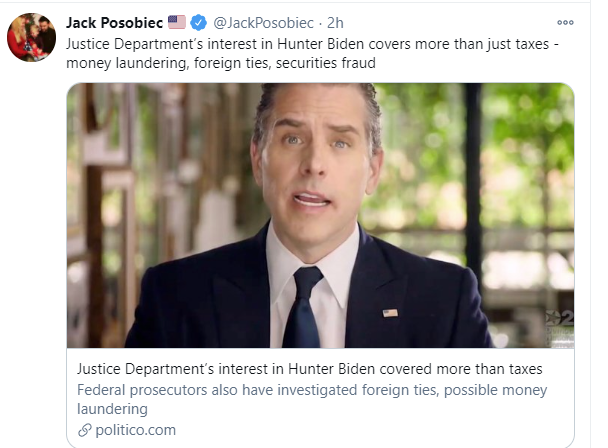 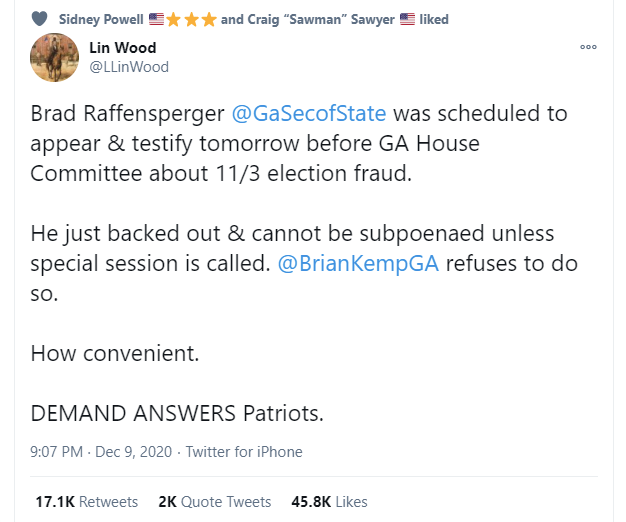 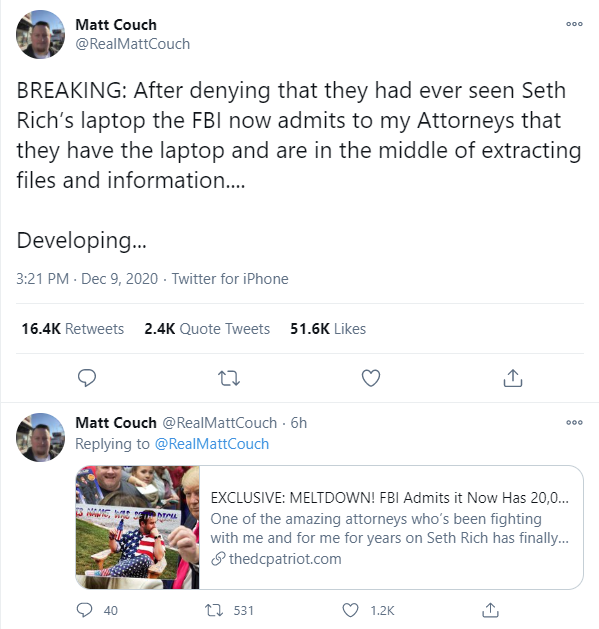 Who is Seth Rich? I mentioned him the other day in reference to GA governor’s daughter’s boyfriend getting killed in an auto accident as a potential warning sign to Kemp not to talk or act on corruption in GA election. Seth Rich was a DNC staffer who was talking to Wikileaks about DNC corruption in 2016 and was shot twice in the back and killed on the street with no resolution as to who did it.

This number varies from 48 to 71 but here is an article listing 48 people who committed suicide or mysteriously died around The Clintons. There are many others.

The point is there are dark forces at work around politics and our vaunted FBI is the home of many of them. It should not take 4 years to start investigating Seth Rich’s laptop or 1 year to start looking at Hunter Biden’s or never impound a single voting machine or pull in the Georgia convention center poll workers caught on video or talk to the hundreds of witnesses that signed affidavits saying they saw corruption.

Yeah this and Durham’s never-ending investigation to nowhere. You know, if anything actually came of these investigations it would be understandable or at least plausible that they take this long. But when you see democrats attack Roger Stone’s house with 29 FBI agents with AR-15’s and other weapons drawn for a white collar crime and then rush it through trial all in months not years, there is injustice in our legal system. Or when they sent 15 federal agents to investigate a rope in a garage at NASCAR, the same rope used in all other garages at the same NASCAR location, but no agents visible at any of the disputed 6 swing states election sites. Or 40 FBI agents sent to Ferguson MO to investigate the Michael Brown shooting but no agents to investigate ANTIFA and the Kyle Rittenhouse shootings. I could go on and on, but it sure seems that Democrat causes are far more important to the FBI/DOJ than republican causes, but then we were supposed to be happy when Christopher Wray and William Barr were brought in to bring credibility back to the FBI/DOJ, how is that working out for you?

Sorry John, you showed you colors many times during the election and now you are carrying their water again providing cover for the inept FBI. I think a corrupt election carries more weight then offending a crime family.

I didn’t show this wackos video, you can easily find it if you care, just one more democrat losing it on national TV like the teacher in Portland 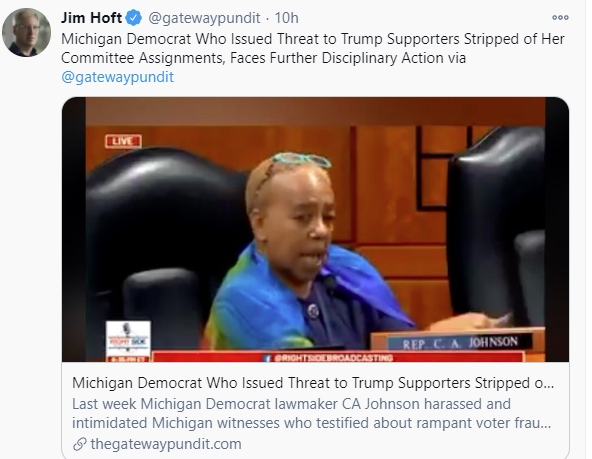 Oh I stumbled on it, here it is 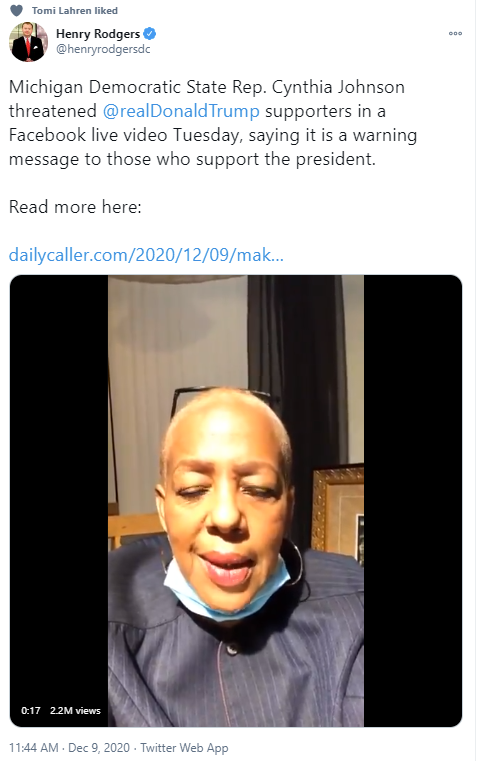